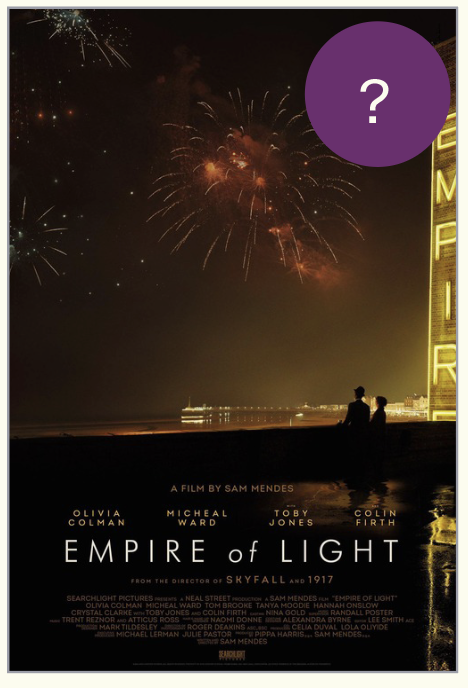 Each week we ask people to grade the week’s newest posters from A+ (“awesome”) to F (“awful”). Here are the final grades.

As we’ve noted before, we have decided NOT to track either of the PINOCCHIO movies – this Disney+ version nor the Netflix version coming later this year – but that doesn’t mean we can’t ask what people think of the poster. It turns out people like it. PINOCCHIO scores an impressive A grade from our respondents.

It was announced this week that HALLOWEEN ENDS will be debuting in theaters and on Peacock. That’s reflected in the fine print at the bottom of this new poster. ENDS has been tracking at an elevated level since we started following it back in January, so it’s not surprising that people are responding positively to the poster.

With EMPIRE OF LIGHT, filmmaker Sam Mendes returns to a more intimate canvas after helming big-budget epics including 1917, SPECTRE, and SKYFALL. If the response to this poster is any indication, fans are excited about this one. Expect EMPIRE to be part of the upcoming awards season conversation.

THREE THOUSAND YEARS OF LONGING has struggled to gain much traction. The tracking numbers have been soft. And though a B is not the worst grade we’ve seen for a poster, it is the lowest of the week. Sadly, it does not bode well for the film’s box office prospects.