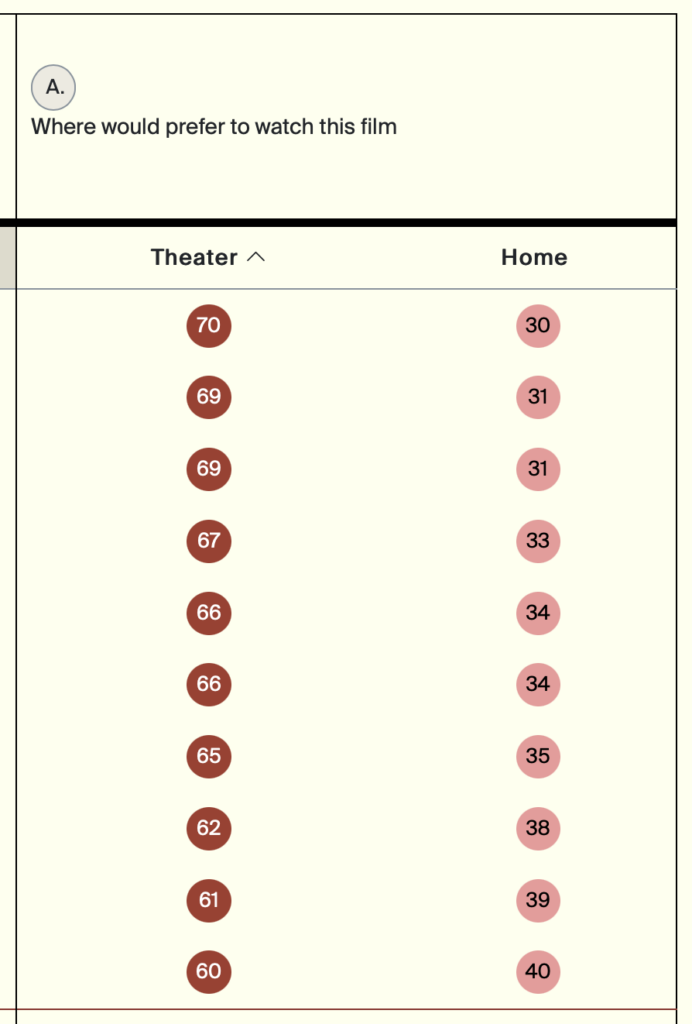 As you know, The Quorum publishes four film tracking metrics: awareness, interest, location, and pay. We often talk about the first two, but among 2022 wide releases, it’s the location metric that correlates the most to a film’s opening weekend gross.

For those unfamiliar, the location metric measures the percentage of people who prefer to watch the film in a theater versus at home.

It makes sense that location would have a high correlation. Someone could be aware of and interested in a film, but if they will only watch it when it becomes available at home, that person won’t convert to a ticket sale.

Most people chose watching at home over a theater throughout most of the pandemic. During the month of August 2020, for example, when theaters were largely closed and there were no vaccines, on average, 36% of people said they would prefer to watch a film in a theater. It got even worse in December of that year when it dropped to 32%.

In March, the percentage of people who preferred a theater over at home climbed above 50% for the first time. And it has stayed there for three consecutive months in a row. In fact, as you can see below, the number has been growing through April and May.

Of course, this is good news. It is yet another sign that people are returning to theaters and that the box office is continuing its recovery. But more can be read into this data. It could be argued that this reinforces the idea that watching films in a theater is preferable to a streaming service.

Faithful followers of The Quorum know that we have been arguing for weeks that some films slated for streaming would be better served going theatrical. I’m looking at you, HOCUS POCUS 2. And based on the early response to the newly released trailer for HUSTLE, there is reason to believe that Netflix would be wise to expand the theatrical strategy for the Adam Sandler basketball movie.