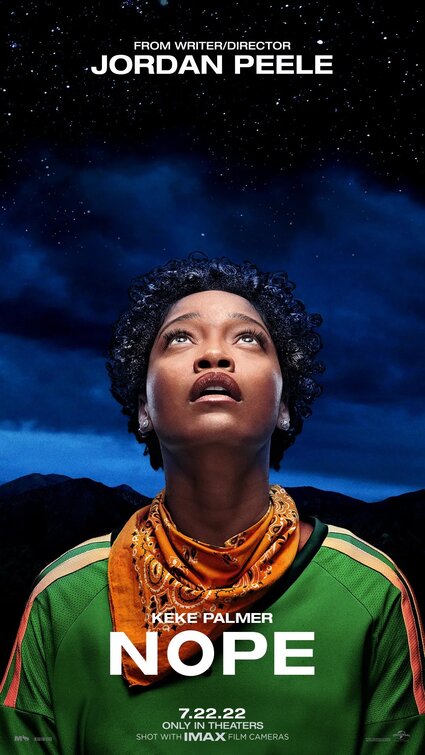 This morning Universal gave us the final trailer for NOPE, Jordan Peele’s follow-up to GET OUT and US, which, combined, made over $350M at the box office on shoestring budgets.

It’s hard to think of any other director who has emerged over the past five years that has been able to combine a unique POV with box office gold. Peele is now a destination filmmaker. His name is enough to bring in audiences.

Universal knows that. That’s why the studio introduced the film during the Super Bowl earlier this year. Advertising during the big game isn’t cheap. It’s usually reserved for expensive tentpole and superhero movies. So it’s a credit to Peele that the studio supported NOPE alongside JURASSIC WORLD DOMINION during the game.

And yet, the numbers for NOPE have been soft. The Super Bowl spot lifted awareness from 19% to 26% (the first gray bar), but since then, it has remained in the mid-20s. Heading into this final trailer, awareness for the film is at 27%.

To give that some context, let’s compare NOPE to THE LOST CITY. NOPE belongs to the “Original – High” group, meaning it is a larger-profile, higher-budget original title. Recent examples of films from this group include MOONFALL, THE NORTHMAN, HOUSE OF GUCCI, and THE LAST DUEL.

We’re choosing THE LOST CITY as the comp because it had the largest opening weekend of the group with $30M. Given that Peele’s last film, US, opened to $71M, I’m sure Universal is surely eyeing a debut above the $30M made by THE LOST CITY.  And yet, when we look at awareness for the two films, NOPE is well behind the 40% awareness for LOST CITY at the same distance from release.

ThThis final trailer is undoubtedly just the beginning of the final push leading to its July 22nd release. The studio also debuted terrific character posters this week, so it’s clear the campaign is ramping up.

So, there is still plenty of time. It will be interesting to see if this spot propels NOPE further up the tracking charts. You know The Quorum will be following this closely.