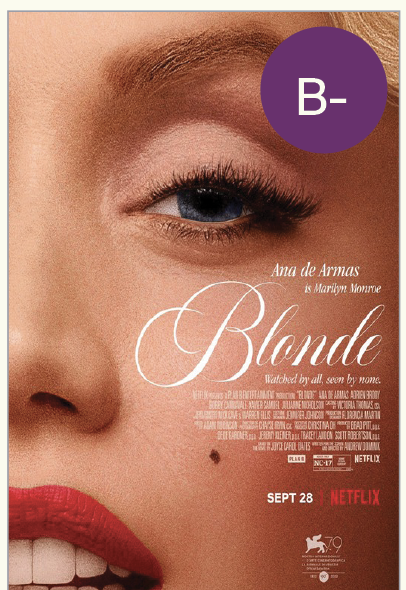 Each week we ask people to grade the week’s newest posters from A+ (“awesome”) to F (“awful”). Here are the final grades.

Glen Powell already has one military flying blockbuster under his belt with TOP GUN: MAVERICK. Will he strike gold again with DEVOTION? Powell stars opposite Jonathan Majors in this Sony release, which opens Thanksgiving weekend. With an average grade of B+, the highest of the week, this poster was fairly well received.

It gets us very excited when studios do very early campaign launches. In this case, Universal gave us a teaser and poster for Christopher Nolan’s OPPENHEIMER exactly one year before its July 21, 2023 release. Unfortunately, the poster didn’t blow up among our survey takers. They gave it a B-.

We are enormously excited about this Netflix original. We also love this super cropped photo of Ana de Armas as Marilyn Monroe. Apparently, we are in the minority since this poster only received a B- grade.

HONK FOR JESUS, SAVE YOUR SOUL:

Once again, Focus is very late in putting out a poster. The one-sheet for HONK FOR JESUS, SAVE YOUR SOUL arrived just a few weeks before its September 2nd release date. Respondents were not singing its praises, giving it a B- grade.

In March, A24 released the movie X. It grossed $11.8M on rapturous reviews. In September, just six months later, A24 will release PEARL, a prequel to X. The poster for this one received a C.